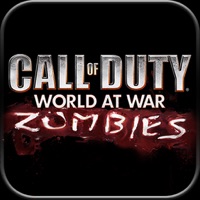 You can play Call of Duty: Zombies for the iPhone with up to four players via Wi-Fi/Internet or two players via Bluetooth. Hunt zombies with your buddies in the same room, city, or even the world, whether in the same room or across the globe. You can choose open or private matchmaking, so long as there’s a Wi-Fi connection.

All 4 Zombie maps from Call of Duty: World at War are now available on the iPhone™ in a smooth 3D environment. Your favorite guns and killer bonuses are also back.

There are three different control schemes to match your preferences. You can either use the iPhone’s unique tilt abilities or virtual analog sticks to battle the undead, or you can simply use the standard controls.

With iPhone or iPod Touch, you can directly access the world’s greatest zombie killer via the leaderboards. Show the world your position by becoming the most excellent zombie killer.

Note: Call of Duty: Zombies is best played on a 2nd generation iPod Touch or higher with the latest firmware installed.

So snap to attention, pick up Call of Duty: Zombies, and start fending off the zombie